Retail investors’ influence in China’s stock market is fading as institutional dominance grows, standing in contrast to a global surge in amateur trading that has grabbed headlines from New York to Seoul.

Professional investors’ holdings of freely floating shares in Shanghai and Shenzhen climbed to more than 70 per cent between a stock market crash in 2015 and June 2020, according to China Renaissance, an investment bank. Those held by amateur traders have dropped from about 50 to 23 per cent in the same period.

That is at odds with the US, observers say, where the rise of fee-free trading platforms such as Robinhood has prompted an increase in retail investor participation and wild swings in some stocks. It has also raised questions about what the world’s largest stock market can learn from China, where regulators have crimped retail traders’ capacity to induce huge bouts of volatility.

“The Chinese market is becoming more institutional and the US market may be getting a fair bit less so,” said Andrew Sinclair, an assistant professor of finance at the University of Hong Kong.

From late 2014 to mid-2015, retail investors in China borrowed huge amounts of cash from brokers to buy stocks in a trading frenzy that pushed the CSI 300 index of Shanghai- and Shenzhen-listed stocks up more than 120 per cent. The market imploded after regulators clamped down on margin financing, obliterating more than $5tn in value.

The gut-wrenching volatility recently seen in trading of US stocks including retailer GameStop and cinema chain AMC prompted déjà vu for Cameron Peng, an assistant professor of finance at the London School of Economics.

“The Chinese stock market is a more dramatic version of this,” said Peng, who dabbled in day trading during the country’s 2014-15 equity bubble.

At that time, the rise of mobile brokerage apps allowed hundreds of millions of novice investors to trade on leverage with minimal fees. They were also encouraged to pile into the market by online stock tips, internet forums and even government propaganda.

Analysts point to echoes in the US in recent months with the popularity of apps such as Robinhood and the online forum r/WallStreetBets.

Sinclair and Peng believe that such an influx of retail investors — in the US as in China — can cause shares to become divorced from their underlying values. Unlike long-term institutional investors, retail traders often bid up stock prices with little regard for fundamental attributes such as a company’s earnings.

While Chinese and foreign institutional investors did jump into the country’s 2014-2015 bubble, many managed to sell out before the market plunged, Peng points out.

The Chinese market collapse in 2015 inflicted lasting trauma on many retail investors that has discouraged them from trading again, according to Alex Wolf, head of Asia investment strategy at JPMorgan Private Bank.

It was also “quite scarring for regulators the way they saw that bubble pop”, he added. “They’re [now] very keen to try and prevent that by controlling liquidity as needed.”

For Beijing, that has included greater scrutiny of margin lending by brokers to retail traders. Total margin lending in China remains well below 2015 levels, while only about 1m new margin financing accounts were opened in 2020, compared with 2m-3m during the bubble years.

Bruce Pang, head of research at China Renaissance, said a relative decrease in the Chinese stock market’s volatility during more recent crises — such as the Covid-19 meltdown a year ago — suggested the fall in retail holdings had boosted stability. But institutional participation in Chinese equities still lags behind badly in some ways.

At the end of 2019, retail investors accounted for more than 80 per cent of turnover in Shanghai and Shenzhen, compared with just 16 per cent in institutional investor-dominated Hong Kong, according to a Goldman Sachs report. Goldman estimated that China made up more than a quarter of global equity turnover but just 12 per cent of worldwide market capitalisation.

Chinese policymakers “want to institutionalise the market, and up to this stage it’s an endeavour that has not come anywhere close to meeting what I suspect would be [policymakers’ goals]”, said Peter Alexander, managing director of Z-Ben Advisors, a Shanghai-based consultancy. 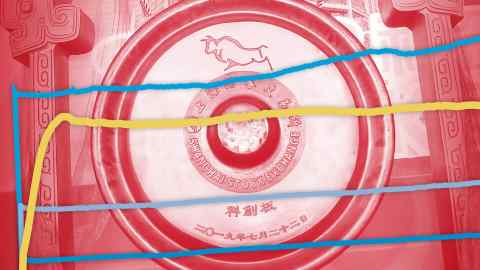 While retail traders in both China and the US have turned to different forms of leverage during their respective rallies, analysts see little difference in how they behave.

While China’s amateur traders deployed margin financing to magnify their bets in 2014-2015, America’s retail investors have in recent months used options to double down on both bullish and bearish trades at the risk of correspondingly greater losses.

“For retail investors or households, it’s not like [the US and China are] drastically different in their trading behaviour,” said the LSE’s Peng.

One aspect that was the same in both China and the US, he added, was the pain of the losses when a bubble finally did burst.