England would only suffer 35,000 Covid hospitalisations if the entire population got infected right now compared to a quarter of a million in Germany, a study backed by several SAGE scientists has found.

The London School of Hygiene and Tropical Medicine (LSHTM) analysis suggests the NHS is unlikely to be overwhelmed by the virus even in the event of a major surge.

Researchers looked at vaccination rates and cumulative infection numbers in 18 countries in Europe to estimate levels of immunity and work out what would happen if everyone was suddenly exposed to the virus.

England would be the least affected in the hypothetical scenario with 34,720 admissions and 6,200 deaths. Even though the model only looked at England, there is nothing to suggest Scotland, Wales and Northern Ireland would be hit harder.

There have been more than 500,000 Covid hospitalisations in England alone in the last 18 months, for comparison, with just over 140,000 dying with the virus.

The study estimated around 280,000 people in Germany would be hospitalised with the virus — the most of any country in Europe — while Romania would suffer around 150,000.

The researchers include Dr Rosanna Barnard, Dr Nick Davies and Dr Adam Kucharski — three members of SAGE whose modelling has been instrumental in Government policy during the pandemic.

They said higher levels of prior infection and the success of the booster rollout in England meant the country is likely to be better protected than its neighbours this winter.

Britain was branded the ‘sick man of Europe’ this summer after it dropped all restrictions in England in July and saw cases spiral to as much as 50,000 a day. But experts now say opening up early allowed the country to frontload its cases, meaning more people now have immunity than in Europe.

Just 62 per 100,000 people in England would be hospitalised if they were exposed to Covid with no further restrictions put in place, according to research by the London School of Hygiene and Tropical Medicine. It has the lowest expected admissions in Europe thanks to its successful booster rollout and high levels of prior infection The number of Covid intensive care in-patients in European countries like Belgium, Germany, the Netherlands and France are on the rise and heading into levels not seen since the start of the year. In comparison the UK’s number of patients requiring intensive care is levelling off Austria has the highest Covid cases per million people in Europe, followed by the Netherlands, Belgium and Ireland The UK’s booster drive has steamed ahead of others on the continent. More than 20 per cent of Brits have now got a booster, which is almost double the level in Austria

Another 700,000 Europeans could die from Covid this winter, the World Health Organization warned today.

WHO officials suggested the continent’s death toll was set to spiral from 1.5million to 2.2million by March amid a ferocious fourth wave.

This figure includes 53 countries in Europe, including EU member states, the UK, Kazakhstan and Russia, among others.

If this prediction is correct, it means that Europe is facing a winter only slightly better than last year, despite vaccines now being widely available.

The WHO said the new wave of the Indian ‘Delta’ variant, vaccine scepticism and relaxing Covid restrictions were to blame for its gloomy prediction.

Some 66 per cent of people in the European Union are already double-jabbed, and many countries are now rolling out booster doses.

Surging cases have also sent several nations scuttling back into lockdowns and tighter restrictions to curb the spread of the virus.

It comes after an AstraZeneca boss suggested that Europe’s hospitalisations are surging because it was slow to roll out their jab to older age groups, unlike the UK.

But scientists say Europe’s fresh wave is likely due to a number of other reasons, including slower booster roll outs, longer lockdowns in the summer and shorter vaccine dosing intervals.

In a sign of a growing crisis the Netherlands today began moving Covid patients to Germany to help ease pressure on its hospitals.

Europe is currently in the midst of a rapidly worsening winter Covid crisis, with cases and hospital admissions creeping up towards levels seen last winter in countries across the continent.

It has seen harsh restrictions and lockdown reimposed, with some countries, including Italy, opting to make vaccines mandatory, sparking protests across the continent.

The World Health Organization yesterday predicted another 700,000 Europeans could die from Covid in the coming months — despite the availability of vaccines.

As well as slower vaccine rollouts, mobility data shows that in recent weeks Europeans have socialised more than Britons, whose behaviours have remained cautious even after lockdown.

The LSHTM paper — which has not yet been peer-reviewed and was published on the preprint website MedRxiv — estimated the number of hospitalisations for countries in the ‘short term’ — meaning it did not include the effects of waning immunity or emergence of new variants — but did not specify the exact timescale for the hospitalisations.

It also did not specify how serious the hospitalisations would be and if intensive care would be required.

Researchers modelled the remaining admissions and deaths that could occur using vaccine and corresponding infection fatality data, as well as natural immunity figures.

They accounted for age and modelled based on if no further Covid restrictions were put in place in countries and people returned to pre-pandemic levels of socialising.

Germany had the highest level of overall expected hospitalisations, while Denmark had the lowest with just 6,300 expected.

England had the lowest rate per population size of any of the 19 countries studied, while Romania had the highest.

In total, Germany was expected to have the highest death toll with 115,000, while Slovenia has the lowest with 1,200.

The authors said: ‘Aside from Romania, where vaccine coverage is low, countries with a combination of lower vaccine coverage among older age groups, relatively low prior exposure and older populations — Austria, Finland, Germany, Greece, the Netherlands, Slovenia — have the highest maximum remaining burdens.

‘They have the potential to experience much higher numbers of hospitalisations and deaths among the elderly than countries with younger populations and high coverage in older age groups. Just 67million doses of AZ have been distributed across the continent compared to 440m of Pfizer’s, even though more recent studies suggest the UK jab provides longer protection against severe disease in older people

Throwing off Covid restrictions in the summer may have saved the UK from Europe’s winter wave, experts have claimed.

On ‘Freedom Day’ in July England dumped its remaining measures — including face masks and social distancing.

This allowed the virus to let rip and cases soar over the warmer months when the NHS was less busy.

Experts say the move frontloaded infections into the summer, bolstering immunity for the winter.

Professor Paul Hunter, an infectious diseases expert at the University of East Anglia, said the UK was in a different position to Europe because it had so many infections earlier in the year.

And Sir John Bell, an Oxford University professor and Government adviser, echoed his comments claiming that Freedom Day had ‘given us longer-term protection’.

Sir John said he was confident that Christmas will be business as usual this year, telling Britons to ‘order that turkey, because it’ll be fine’.

The UK was slammed as the ‘sick man of Europe’ throughout the summer and autumn for consistently recording the highest levels of infection on the continent.

But many European neighbours including Austria, the Netherlands and Ireland are now recording a higher infection rate.

‘It varies considerably between countries, with countries that have experienced less transmission so far, have lower vaccine coverage and/or have older populations having much higher potential outstanding burdens.’

The modelling is based on data from October and the study’s lead author Dr Lloyd Chapman said if the study was done at the end of November, it is likely the picture would look even better in England.

It comes after the WHO yesterday suggested warned Europe’s total death toll is set to spiral from 1.5million to 2.2million by March amid a ferocious fourth wave.

This figure includes 53 countries in Europe, including EU member states, the UK, Kazakhstan and Russia, among others.

If this prediction is correct, it means that Europe is facing a winter only slightly better than last year, despite vaccines now being widely available.

The WHO said the new wave of the Indian ‘Delta’ variant, vaccine scepticism and relaxing Covid restrictions were to blame for its gloomy prediction.

Meanwhile Pascal Soriot, chief executive at AstraZeneca, yesterday said spiralling admissions on the continent could be caused by countries delayed rolling out the company’s vaccine to older people.

Mr Soriot said the decision by most major EU nations to restrict the jab earlier in the year could explain why Britain’s neighbours are now starting to record higher intensive care rates despite having similar case numbers to the UK.

Just 67million doses of AZ have been distributed across the continent compared to 440m of Pfizer’s, even though more recent studies suggest the Oxford-made jab provides longer protection against severe disease in older people.

French President Emmanuel Macron was accused of politicising the roll out of the British-made vaccine in January when he trashed it as ‘quasi-effective’ for people over 65 and claimed the UK had rushed its approval, in what some described as Brexit bitterness.

Germany’s chancellor Angela Merkel, 66, also added to initial doubts over the vaccine, stating in February she would not get the jab as her country’s vaccine regulator infamously recommended at time that those over the age of 65 should not have the jab. But Merkel did eventually get the AstraZeneca in April.

EU scepticism about the jab centred around the fact only two people over the age of 65 caught Covid in AZ’s global trials, out of 660 participants in that age group.

Although the vaccine was eventually reapproved for elderly people in France, Germany and other major EU economies, the reputational damage drove up vaccine hesitancy and led to many elderly Europeans demanding they be vaccinated with Pfizer’s jab. Some, such as Denmark and Norway, stopped using AZ for good. 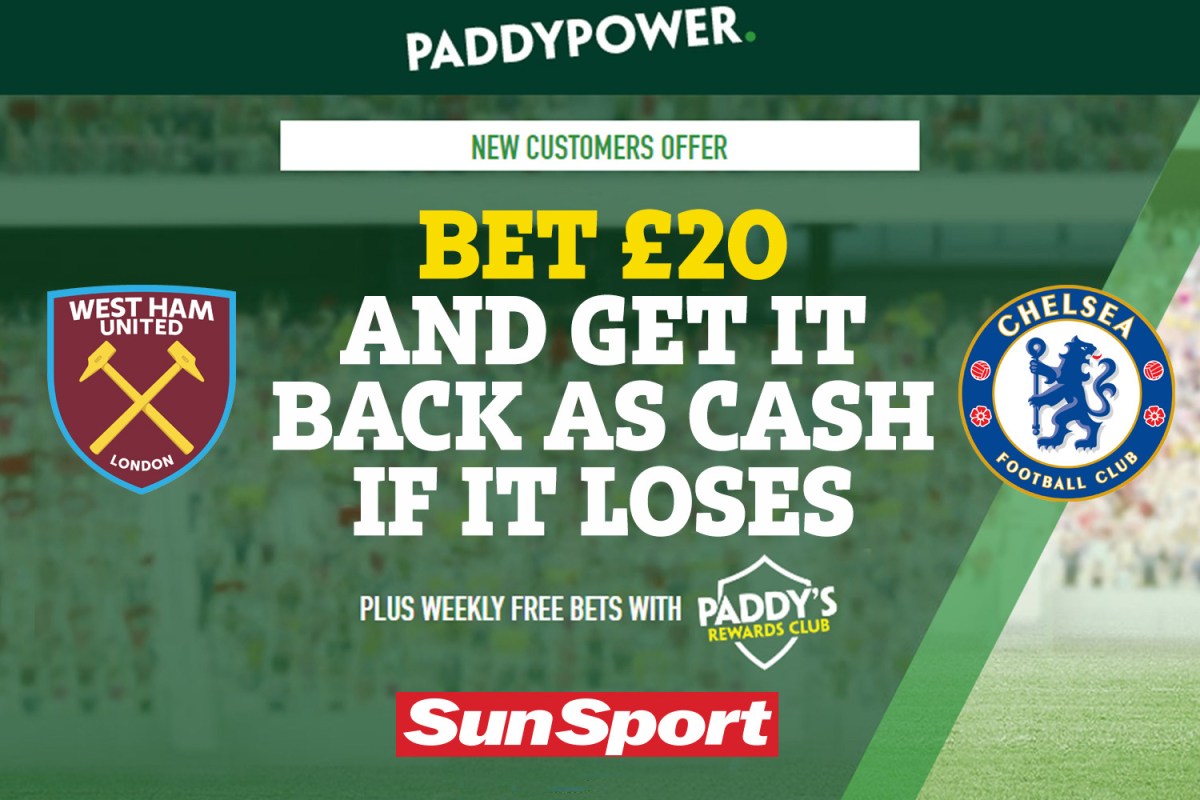 West Ham vs Chelsea betting offer: Bet £20, get money back as cash if you lose!
2 seconds ago